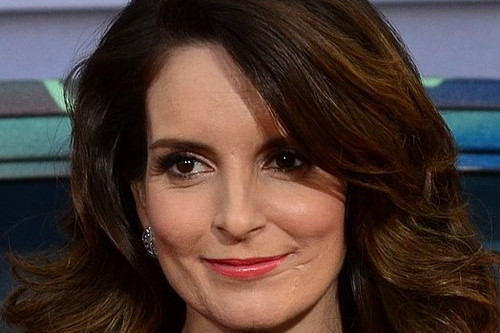 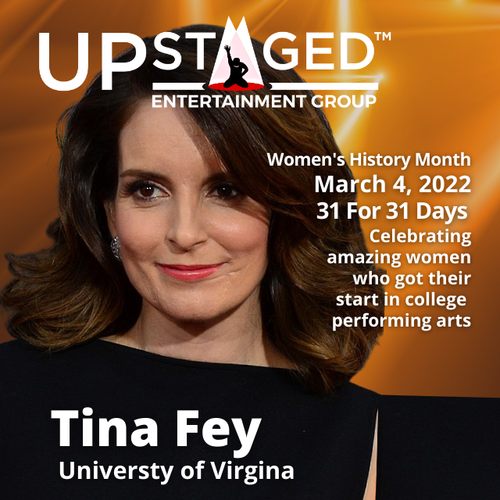 In celebration of Women’s History Month, the National Collegiate Performing Arts (NCPA)TM and UpStaged Entertainment Group, has announced Tina Fey as one of its 31 for 31 most empowering dynamic women – throughout business, politics and entertainment – who got their start in college performing arts.

Fey broke into comedy as a featured player in the Chicago-based improvisational comedy group The Second City. She joined Saturday Night Live (SNL) as a writer, later becoming head writer and a performer, appearing as co-anchor in the Weekend Update segment and, later, developing a satirical portrayal of 2008 Republican vice presidential candidate Sarah Palin in subsequent guest appearances. In 2004, she co-starred in and wrote the screenplay for Mean Girls, which was adapted from the 2002 self-help book Queen Bees and Wannabes. After leaving SNL in 2006, Fey created the television series 30 Rock for Broadway Video, a sitcom loosely based on her experiences at SNL. In the series, Fey starred as Liz Lemon, the head writer of a fictional sketch comedy series. In 2011, she released her memoir, Bossypants, which topped The New York

Times Best Seller list for five weeks and garnered her a Grammy Award nomination. In 2015, she co-created the Netflix comedy series Unbreakable Kimmy Schmidt. Fey created the musical adaptation Mean Girls, which premiered on Broadway in 2018, and earned her a Tony Award nomination.

Elizabeth Stamatina Fey was born on May 18, 1970 in Upper Darby Township, Delaware County, Pennsylvania. Her father, Donald Henry Fey, was a Korean War veteran, university administrator for the University of Pennsylvania and Thomas Jefferson University, and a grant proposal writer who raised $500 million for schools, hospitals, and public service agencies through proposals and direct mail appeals. Following her father’s death, Fey established a scholarship fund in his name at his alma mater, Temple University, to support war veterans studying journalism. Her mother, Zenobia “Jeanne” (née Xenakes), is a retired brokerage employee born in Piraeus, Greece. Fey’s maternal grandmother, Vasiliki Kourelakou, left the Greek village of Petrina on her own and arrived in the United States in February 1921. Fey’s father had English, German, Irish and Scottish ancestry; one of her paternal ancestors was John Hewson, an English textile manufacturer who immigrated to the United States with the support of Benjamin Franklin, enabling Hewson to open a quilting factory in the Kensington neighborhood of Philadelphia, Pennsylvania. According to a genealogical DNA test arranged by the television series Finding Your Roots, Fey’s ancestry is 94% European, 3% Middle Eastern, and 3% from the Caucasus. She has a brother, Peter, who is eight years older.

Fey describes encountering comedy early: I remember my parents sneaking me in to see Young Frankenstein. We would also watch Saturday Night Live, or Monty Python, or old Marx Brothers movies. My dad would let us stay up late to watch The Honeymooners. We were not allowed to watch The Flintstones though: my dad hated it because it ripped off The Honeymooners. I actually have a very low level of Flintstones knowledge for someone my age.

At age 11, Fey read Joe Franklin’s Seventy Years of Great Film Comedians for a school project about comedy. She grew up watching Second City Television and has cited Catherine O’Hara as a role model.

Fey went by the nickname “Tina” at an early age. She attended Cardington-Stonehurst Elementary School and Beverly Hills Middle School in Upper Darby. By middle school, she knew she was interested in comedy. Fey attended Upper Darby High School, where she was an honors student, a member of the choir, drama club, and tennis team, and co-editor of the school’s newspaper, The Acorn. She anonymously wrote the newspaper’s satirical column, The Colonel. Following her graduation in 1988, Fey enrolled at the University of Virginia, where she studied play-writing and acting and was awarded the Pettway Prize. She graduated in 1992 with a Bachelor of Arts degree in drama.