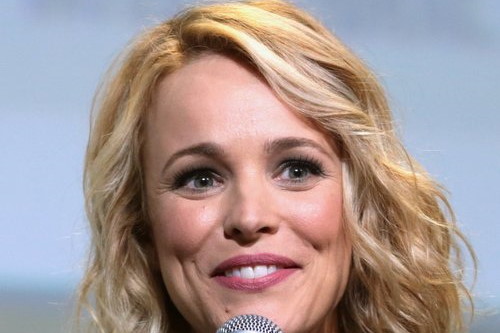 Rachel Anne McAdams is a Canadian actress. After graduating from a theatre degree program at York University in 2001, she worked in Canadian television and film productions, such as the drama film Perfect Pie (2002), for which she received a Genie Award nomination, the comedy film My Name Is Tanino (2002), and the comedy series Slings and Arrows (2003–2005), for which she won a Gemini Award. 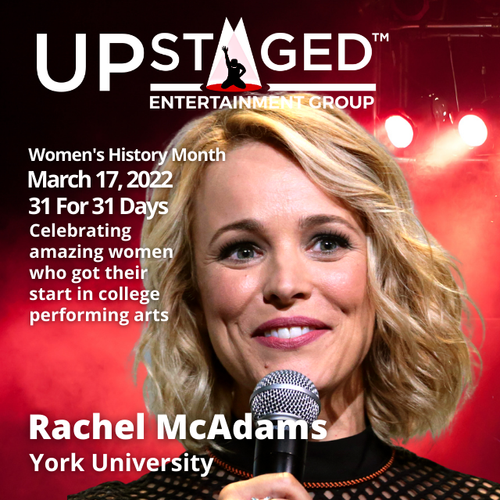 In celebration of Women’s History Month, the National Collegiate Performing Arts (NCPA)TM and UpStaged Entertainment Group, has announced Rachel McAdams as one of its 31 for 31 days of March most empowering dynamic women – throughout business, politics and entertainment – who got their start in college performing arts.

In 2002, she made her Hollywood film debut in the comedy The Hot Chick. McAdams rose to fame in 2004 with the comedy Mean Girls and the romantic drama The Notebook. In 2005, she starred in the romantic comedy Wedding Crashers, the psychological thriller Red Eye, and the comedy-drama The Family Stone. She was hailed by the media as Hollywood’s new “it girl“, and received a BAFTA Award nomination for Best Rising Star.

After a brief sabbatical, she returned to prominence in 2009, by appearing in the political thriller State of Play, the romance The Time Traveler’s Wife, and the 2009 mystery film Sherlock Holmes. In 2010, McAdams appeared in the star vehicle comedy film Morning Glory, and went on to star in the films Midnight in Paris (2011), The Vow (2012), and About Time (2013). In 2015, she starred in the second season of the HBO anthology crime drama series True Detective, and portrayed the journalist Sacha Pfeiffer in the drama Spotlight. For the latter, she was nominated for the Academy Award for Best Supporting Actress. This was followed by roles in the superhero film Doctor Strange (2016), the romantic drama Disobedience (2017), and the comedies Game Night (2018) and Eurovision Song Contest: The Story of Fire Saga (2020).

Rachel Anne McAdams was born on November 17, 1978, in London, Ontario, Canada, to nurse Sandra (née Gale) and truck driver Lance McAdams. She grew up in St. Thomas in a Protestant household. She is the eldest of three children; she has a younger sister, Kayleen McAdams (born 1982), a make-up artist, and a younger brother, Daniel “Dan” McAdams, a personal trainer.[8][9][10] McAdams is of Scottish, English, Irish, and Welsh descent. Her maternal fifth great-grandfather, James Gray, was a Loyalist Ranger during the American Revolution and fled to Canada after the Battles of Saratoga.

McAdams began figure skating when she was four years old, but turned down an opportunity to move to Toronto when she was nine years old for pair skating training. She competed in skating until the age of 18, winning regional awards. Skating would later become only a hobby. She has said that skating prepared her for physical acting, because it trained her to be “in tune” with her body.

McAdams was educated at Myrtle Street Public School, and later Central Elgin Collegiate Institute. She has stated that she did not enjoy academic work and often would pretend to be sick to avoid going to school. Nonetheless, she was active in student life. In addition to playing sports (including volleyball, badminton, and soccer), McAdams served on the student council, participated in the Crime Stoppers program, and was a member of the Peer Helping Team.[5] She worked at a McDonald’s restaurant during the summer holidays for three years.

McAdams first developed an interest in performing when she was seven years old and, while her parents did not discourage her, they did not “go out and find [her] an agent.” She attended both Disney and Shakespeare summer camps as a child. From the age of 12, McAdams participated in Original Kids Theatre Company, London productions. In her late teens, she directed children’s theatre productions. She was also involved in school stage productions, most notably winning a performance award at the Sears Ontario Drama Festival. She was inspired by two of her teachers, who taught her English and drama, respectively, in the 11th and 12th grades. McAdams intended to take cultural studies at the University of Western Ontario, before being persuaded by her drama teacher that a professional acting career was a viable option. She enrolled in York University‘s four-year theatre program and graduated with a Bachelor of Fine Arts honours degree in 2001. While at university, McAdams worked with the Toronto-based Necessary Angel Theatre Company.