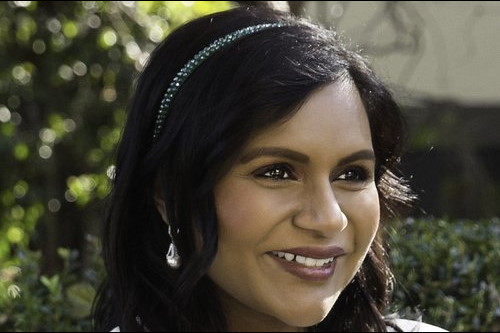 Vera Mindy Chokalingam (born June 24, 1979), known professionally as Mindy Kaling (/ˈkeɪlɪŋ/), is an American actress, comedian, screenwriter, producer, director, and author. She first gained recognition starring as Kelly Kapoor in the NBC sitcom The Office (2005–2013), for which she also served as a writer, executive producer, and director. For her work on the series, she was nominated for a Primetime Emmy Award for Outstanding Writing in a Comedy Series and five times for Outstanding Comedy Series. 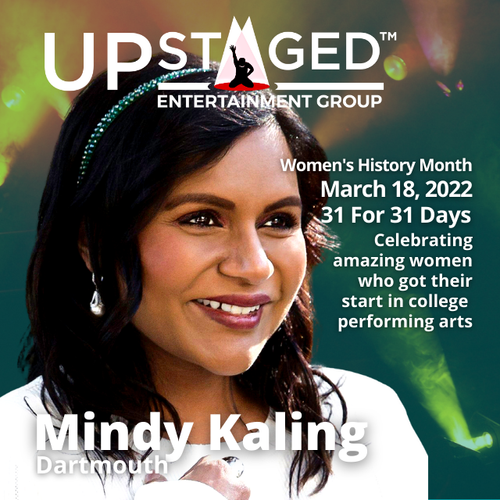 In celebration of Women’s History Month, the National Collegiate Performing Arts (NCPA)TM and UpStaged Entertainment Group, has announced Mindy Kaling as one of its 31 for 31 days of March most empowering dynamic women – throughout business, politics and entertainment – who got their start in college performing arts.

Kaling gained wider attention for creating, producing and starring in the Fox comedy series The Mindy Project (2012–2017). She created the NBC sitcom Champions (2018), also appearing in five episodes, the Hulu miniseries Four Weddings and a Funeral (2019), the Netflix comedy-drama series Never Have I Ever (2020–present), and the HBO Max comedy-drama series The Sex Lives of College Girls (2021–present).

Vera Mindy Chokalingam was born in Cambridge, Massachusetts, to father Avudaiappan Chokalingam, an architect, and mother Swati Chokalingam (née Roysircar), an obstetrician/gynecologist (OB/GYN). She has an elder brother, Vijay, who is a doctor. Kaling’s parents are from India and met while working at the same hospital in Nigeria. Her father, a Tamil raised in Chennai (Madras), was overseeing the building of a wing of the hospital, and her mother, a Bengali in Mumbai, was working as an OB/GYN. The family immigrated to the United States in 1979, the same year Kaling was born. Kaling’s mother died of pancreatic cancer in 2012.

Kaling has said she has never been called Vera, her first name, but has been referred to as Mindy since her mother was pregnant with her while her parents were living in Bengal. They were already planning to move to the United States and wanted, Kaling said, a “cute American name” for their daughter, and liked the name Mindy from the TV show Mork & Mindy. The name Vera is, according to Kaling, the name of the “incarnation of a Hindu goddess.” Kaling graduated from Buckingham Browne & Nichols, a private school in Cambridge, in 1997. The following year, she entered Dartmouth College, where she was a member of the improvisational comedy troupe The Dog Day Players and the a cappella group The Rockapellas, was the creator of the comic strip Badly Drawn Girl in The Dartmouth (the college’s daily newspaper), and was a writer for the Dartmouth Jack-O-Lantern (the college’s humor magazine).

Kaling graduated from Dartmouth College in 2001 with a bachelor’s degree in playwriting. She was a classics major for much of college and studied Latin, a subject she had been learning since the seventh grade. Kaling lists the comedy series Dr. Katz, Saturday Night Live, Frasier and Cheers as early influences on her comedy.