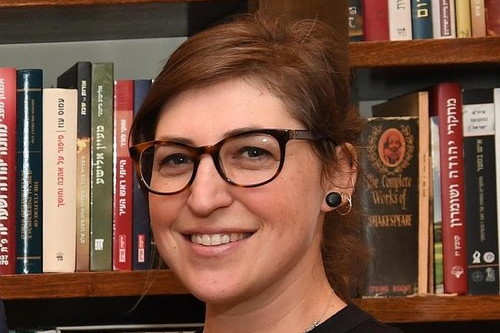 Mayim Chaya Bialik (/ˈmaɪɪm biˈɑːlɪk/ MY-im bee-AH-lik; born December 12, 1975) is an American actress, game show host, and author. From 1991 to 1995, she played the title character of the NBC sitcom Blossom. From 2010 to 2019, she played neuroscientist Amy Farrah Fowler on the CBS sitcom The Big Bang Theory, for which she was nominated four times for the Primetime Emmy Award for Outstanding Supporting Actress in a Comedy Series[1] and won the Critics’ Choice Television Award for Best Supporting Actress in a Comedy Series in 2015 and 2017. 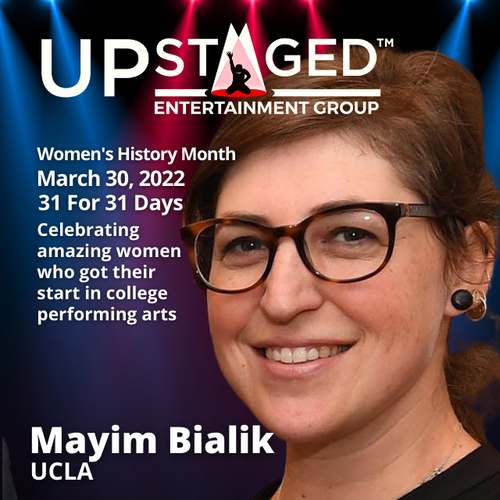 In celebration of Women’s History Month, the National Collegiate Performing Arts (NCPA)TM and UpStaged Entertainment Group, has announced Mayim Bialik as one of its 31 for 31 days of March most empowering dynamic women – throughout business, politics and entertainment – who got their start in college performing arts.

In August 2021, it was announced that Bialik would host the primetime version of Jeopardy! After Mike Richards stepped down from hosting the syndicated version of the show later that month, Bialik started concurrently hosting that version as well (sharing duties with Ken Jennings).

Mayim Chaya Bialik was born on December 12, 1975, in San Diego, California, to Barry and Beverly (née Winkleman) Bialik. Her family were Jewish immigrants who lived in the Bronx, New York City. Three of her four grandparents migrated from Poland, Czechoslovakia, and Hungary. She was raised as a Reform Jew but now considers herself Modern Orthodox Jewish. Bialik had a Bat Mitzvah and has called herself a “staunch Zionist“. Her name, Mayim (“water” in Hebrew), originates in a family nickname of her great-grandmother, Miriam. The Hebrew-language poet Hayim Nahman Bialik was her great-great-great-granduncle.

Bialik graduated in 1993 from North Hollywood High School in North Hollywood, California. In acknowledgment of her acting commitments, she was granted a deferred acceptance and attended University of California, Los Angeles (UCLA). She earned a Bachelor of Science degree in neuroscience, with minors in Hebrew and Jewish studies, in 2000.

Bialik has said she did not have the grades needed for medical school. She went on to study for a doctorate in neuroscience. She took a break from studies in 2005 to return to acting. She returned to earn her Doctor of Philosophy degree in neuroscience from UCLA in 2007 under Dr. James McCracken. Her dissertation was titled “Hypothalamic regulation in relation to maladaptive, obsessive-compulsive, affiliative and satiety behaviors in Prader–Willi syndrome“.