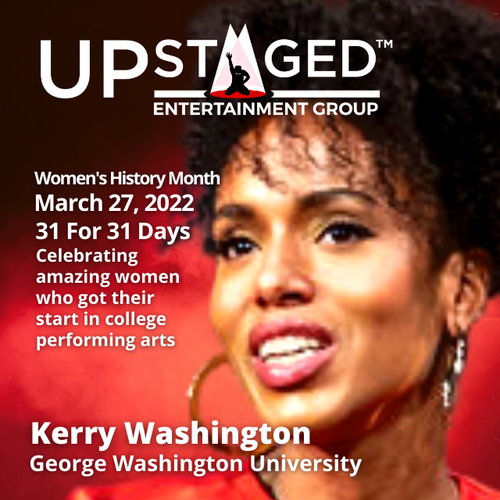 In celebration of Women’s History Month, the National Collegiate Performing Arts (NCPA)TM and UpStaged Entertainment Group, has announced Kerry Washington as one of its 31 for 31 days of March most empowering dynamic women – throughout business, politics and entertainment – who got their start in college performing arts.

Time magazine included Washington in its Time 100 list of most influential people in 2014. In 2018, Forbes named her the eighth highest-paid television actress. Washington has won a Primetime Emmy Award and five NAACP Image Awards, including The President’s Award.

Washington was born in the Bronx, New York City, the daughter of Valerie, a professor and educational consultant, and Earl Washington, a real estate broker. Her father’s family is of African American origin, having moved from South Carolina to Brooklyn. Her mother’s family is from Manhattan, and Washington has said that her mother is from a “mixed-race background and from Jamaica, so she is partly English and Scottish and Native American, but also descended from enslaved Africans in the Caribbean.” Through her mother, she is a cousin of former U.S. Secretary of State Colin Powell.[13]

Washington performed with the TADA! Youth Theater teen group and attended the Spence School in Manhattan from her pre-teen years until graduating from high school in 1994.  At the age of 13, she was taken to watch Nelson Mandela speak at Yankee Stadium upon his release from prison. She attended George Washington University, graduating Phi Beta Kappa in 1998 with a double major in anthropology and sociology.[15][16] She also studied at Michael Howard Studios in New York City.

In April 2016, Washington confirmed that, in the 1990s in New York, she learned to dance from Jennifer Lopez. During her appearance on The Tonight Show Starring Jimmy Fallon, she told host Jimmy Fallon: “I’ve been taking dance for a long time, since I was a little girl. I had this very inspiring teacher named Larry Maldonado, for anybody from my neighborhood in the Bronx, he was our role model. … And he had an awesome substitute teacher named Jennifer, who would sometimes step in and teach. But, then she left to move to Los Angeles and be on the TV show In Living Color. So, yes, I learned to dance from JLo!”

In 2007, Washington and other celebrities joined for the 2007 Lee National Denim Day, supporting the Women’s Cancer Programs of the Entertainment Industry Foundation. In September 2012, Washington spoke at the Democratic National Convention in favor of re-electing Barack Obama, with her speech focusing on addressing voter apathy. Washington has also used her celebrity to support voter registration drives and recently encouraged her Twitter followers to make sure they have the appropriate ID needed to vote by contacting VoteRiders, a voter ID education organization.

Washington is also a supporter of LGBT rights. In August 2013, she was named an honorary chairperson of the GLSEN Respect Awards; and she received the GLAAD Vanguard Award on March 21, 2015. In June 2016, the Human Rights Campaign released a video in tribute to the victims of the Orlando nightclub shooting; in the video, Washington and others told the stories of the people killed there.

She is a member of the Creative Coalition; which is a board of actors, writers, musicians, and producers that explore issues that are at the forefront of national discourse. She is also a member of V-Day, a global movement that brings awareness to violence against women and girls. In March 2016, Washington and fellow ShondaLand colleagues, Ellen Pompeo, Viola Davis and Shonda Rhimes, appeared in a commercial endorsing Hillary Clinton for president.

Washington emceed the third night of the 2020 Democratic National Convention.[90]