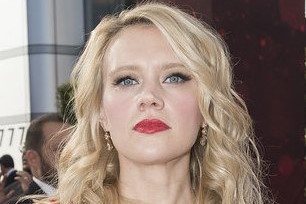 McKinnon has been nominated for nine Primetime Emmy Awards, including one for Outstanding Original Music and Lyrics and eight for Outstanding Supporting Actress in a Comedy Series, winning in 2016 and 2017. 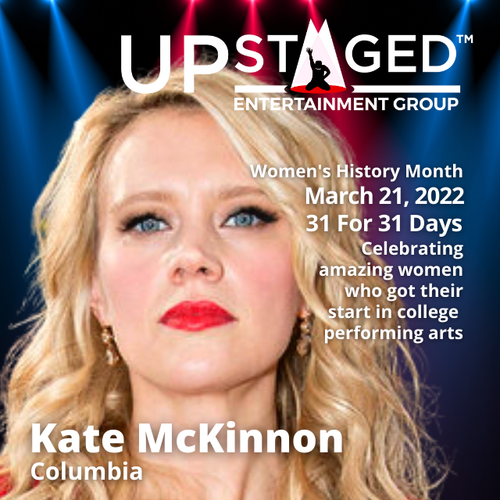 In celebration of Women’s History Month, the National Collegiate Performing Arts (NCPA)TM and UpStaged Entertainment Group, has announced Kate McKinnon as one of its 31 for 31 days of March most empowering dynamic women – throughout business, politics and entertainment – who got their start in college performing arts.

McKinnon was born and raised on Long Island in the town of Sea Cliff, New York, to Laura Campbell, a parent educator, and Michael Thomas Berthold, an architect. She has a younger sister, comedian Emily Lynne, with whom she has collaborated on the Audible series Heads Will Roll, as well as the digital series Notary Publix. Their father died when McKinnon was 18 years old.

McKinnon’s knack for accents began when she was in fifth grade. She auditioned to be “the queen of reading week” and used an English accent. In an interview with Rolling Stone, she says, “I think the genesis of my entire life, probably, was the smiles I elicited doing this British accent. I’ve been chasing that dragon ever since.”

She graduated from North Shore High School in 2002, and from Columbia University in 2006 with a degree in theatre. There she co-founded a comedy group, Tea Party, that focused on musical improv comedy. At Columbia, she starred in three Varsity shows: V109 Dial D for Deadline, V110 Off-Broadway and V111 The Sound of Muses. Her cast and crewmates included future actors Jenny Slate and Grace Parra, directors Tze Chun and Greta Gerwig, and The Onion managing editor Peter Koechley. She was also a member of Prangstgrüp, a student comedy group which set up and recorded elaborate college pranks.

In 2007, McKinnon joined the original cast of Logo TV‘s The Big Gay Sketch Show, where she was a cast member for all three seasons.

Since 2008, she has performed live sketch comedy regularly at the Upright Citizens Brigade Theatre in New York City. She has also worked as a voice-over actress, and has voiced characters for series such as The Venture Bros., Robotomy, and Ugly Americans. In 2009, McKinnon won a Logo NewNowNext Award for Best Rising Comic. She was nominated for an ECNY Emerging Comic Award in 2010. In 2014, she appeared in the Kennedy Center Honors as part of a tribute to Lily Tomlin. In 2016, she starred in the reboot Ghostbusters, alongside Melissa McCarthy, and fellow SNL cast members Kristen Wiig and Leslie Jones.

McKinnon has made appearances as a voice actress in series like The Simpsons (as Hettie in “Gal of Constant Sorrow“) and Family Guy (as Karen / Heavy Flo in season 14, episode 6 “Peter’s Sister“, and additional voices in other episodes), and films such as Finding Dory, The Angry Birds Movie and Ferdinand. McKinnon voiced Fiona Frizzle in The Magic School Bus Rides Again, a continuation of the Magic School Bus children’s series, from 2017 to 2020.

McKinnon joined the cast of Saturday Night Live as a featured player on April 7, 2012, following a March 28, 2012 report of her being hired. She was promoted to repertory status in season 39 in 2013.

McKinnon began appearing as Hillary Clinton on the series leading up to the 2016 presidential election. The real Clinton appeared alongside her in a sketch during the show’s season 41 premiere. McKinnon has said that her impression of Hillary Clinton comes from a deep admiration, and that she “unequivocally want[ed] her to win” the 2016 presidential election. On November 12, 2016, which was the first show after Clinton’s loss in the election, she reprised the role to open the show with a solo performance of “Hallelujah” by Leonard Cohen, whose death was announced two days before her performance. After the election, McKinnon began to impersonate Kellyanne Conway alongside Alec Baldwin as Donald Trump. On February 11, 2017, she debuted her impression of Elizabeth Warren during Weekend Update and Jeff Sessions in the cold open.