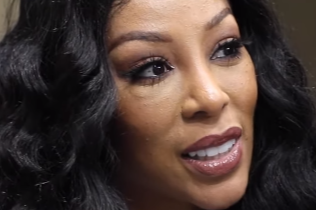 Kimberly Michelle Pate is an American singer, actress, and television personality She rose to fame as the breakout star of VH1‘s Love & Hip Hop: Atlanta after appearing as a regular cast member for two seasons on the reality television series. Michelle subsequently signed with Atlantic Records. Her debut studio album, Rebellious Soul, debuted at number two on the US Billboard 200, and number one on the US Top R&B/Hip-Hop Albums charts. Her second studio album Anybody Wanna Buy a Heart? was released on December 9, 2014. The album debuted at number six in the US and spawned three singles “Love ‘Em All“, “Maybe I Should Call” and “Hard to Do“. The album sold 87,000 copies in its first week in sales. 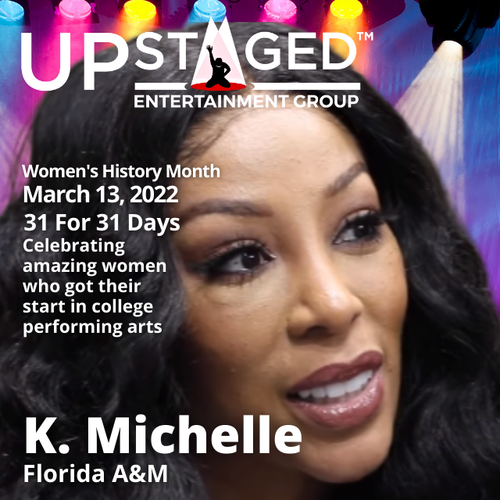 In celebration of Women’s History Month, the National Collegiate Performing Arts (NCPA)TM and UpStaged Entertainment Group, has announced K. Michelle as one of its 31 for 31 days of March most empowering dynamic women – throughout business, politics and entertainment – who got their start in college performing arts.

In March 2016, Michelle’s third studio album, More Issues Than Vogue, was released to positive reviews. Singles from the album included “Not a Little Bit” and “Ain’t You“. Her fourth album, Kimberly: The People I Used to Know was released on December 8, 2017 and debuted at the top ten of the Billboard‘s Top R&B/Hip-Hop Albums chart. Her fifth studio album, All Monsters Are Human was released on January 31, 2020. The album was preceded by two singles “Supahood” and “The Rain“.

She has also starred in reality series Love & Hip Hop: New York, K. Michelle: My Life and Love & Hip Hop: Hollywood (under the name Kimberly), as well as in her own special, The Rebellious Soul Musical, directed by Golden Globe winner Idris Elba. Throughout her career, Michelle has received four BET Awards nominations. She won a Soul Train Music Awards and a NAACP Image Awards in 2013 and 2014. She was also honored with an ASCAP Women Behind the Music award in 2015.

Kimberly Michelle Pate was born in Memphis, Tennessee. As a child, Michelle learned to play piano and guitar, and took voice lessons from Bob Westbrook, who also trained pop singers Justin Timberlake and Britney Spears. She graduated from Overton High School in Memphis in 2000. She earned a music scholarship to Florida A&M University (FAMU) by yodeling at her audition. She was crowned the Freshman Attendant of the Homecoming Court at the age of 18. She is a member of Delta Sigma Theta sorority having pledged FAMU’s Beta Alpha chapter in fall 2001. She reports that she stopped attending classes for a short time to have a son born September 2004, then returned to finish colleg. She graduated from FAMU with honors and was accepted into several law schools but did not attend, opting to pursue music full-time.

Michelle’s age was reported in her college yearbook as 18 in late 2000, which would put her birth year at 1982. Her age was reported as 31 in 2015 by The Source magazine, which would put her birth year at 1984. AllMusic‘s biography of her initially gave a birth year of 1986, but as of at least January 2022 says only “1980s.” Michelle gave 1986 in a 2013 intervi. The editor of “GossipWeLove.com” commented on the discrepancies in reported birth year, registering disbelief that Michelle could have entered college, and won her class’s prom beauty contest, at age 14. Michelle formed a college friendship with Basketball Wives actress Royce Reed who was born in 1981.