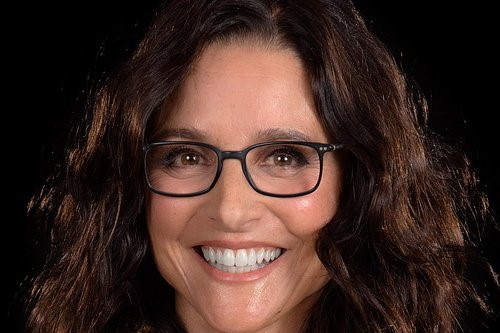 Julia Scarlett Elizabeth Louis-Dreyfus (/ˈluːi ˈdraɪfəs/ LOO-ee-DRY-fəss; born January 13, 1961) is an American actress, comedian, and producer. She is known for her work in the comedy television series Saturday Night Live (1982–1985), Seinfeld (1989–1998), The New Adventures of Old Christine (2006–2010), and Veep (2012–2019). She is one of the most award-winning actresses in American television history, having received more Primetime Emmy Awards and more Screen Actors Guild Awards than any other performer, tying Cloris Leachman (with eight) for the most acting wins. 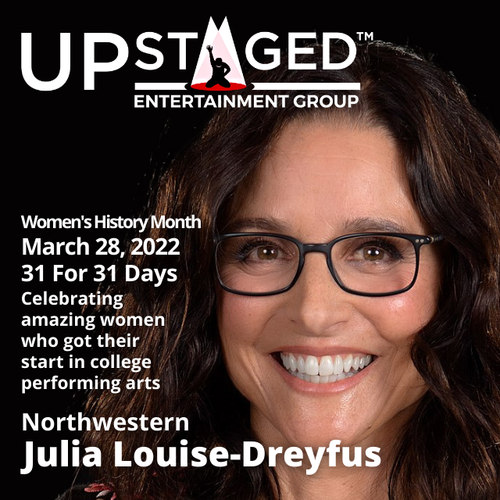 In celebration of Women’s History Month, the National Collegiate Performing Arts (NCPA)TM and UpStaged Entertainment Group, has announced Julia Louise-Dreyfus as one of its 31 for 31 days of March most empowering dynamic women – throughout business, politics and entertainment – who got their start in college performing arts.

Louis-Dreyfus broke into comedy as a performer in The Practical Theatre Company in Chicago, Illinois, which led to her casting in the sketch show Saturday Night Live from 1982 to 1985. Her breakthrough came in 1990 with a nine-season run playing Elaine Benes on Seinfeld, one of the most critically and commercially successful sitcoms of all time. Her other notable television roles include Christine Campbell in The New Adventures of Old Christine, which had a five-season run on CBS; and Selina Meyer in Veep, which ran for seven seasons on HBO.

Louis-Dreyfus has received eleven Emmy Awards, eight for acting and three for producing. She has also received a Golden Globe Award, nine Screen Actors Guild Awards, five American Comedy Awards, and two Critics’ Choice Television Awards. Louis-Dreyfus received a star on the Hollywood Walk of Fame in 2010 and was inducted into the Television Academy Hall of Fame in 2014. In 2016, Lena Dunham in Time named Louis-Dreyfus as one of the 100 most influential people in the world in the artists category in the annual Time 100 list. In 2018, she received the Mark Twain Prize for American Humor, presented by the Kennedy Center as America’s highest comedy honor.

Julia Scarlett Elizabeth Louis-Dreyfus was born in New York City on January 13, 1961. Her American-born mother, Judith (née LeFever), was a writer and special needs tutor, and her French-born father, Gérard Louis-Dreyfus, chaired the Louis Dreyfus Company. Her paternal grandfather, Pierre Louis-Dreyfus, was president of the Louis Dreyfus Group; he was a member of a Jewish family from Alsace and served as a cavalry officer and member of the French Resistance during World War II. She is also a great-great-granddaughter of Léopold Louis-Dreyfus, who in 1851 founded the Louis Dreyfus Group, a French commodities and shipping conglomerate, which members of her family still control; and is distantly related to Alfred Dreyfus of the infamous Dreyfus affair. Her paternal grandmother was born in the US, of partial Mexican origin, and Catholic; during the 1940s, she moved Julia’s father to America from France.

In 1962, one year after Louis-Dreyfus’s birth, her parents divorced. After moving to Washington, D.C., when Julia was four, her mother married L. Thompson Bowles, dean of the George Washington University Medical School; Louis-Dreyfus gained a half-sister Lauren Bowles, also an actress. Due to her stepfather’s work with Project HOPE, Louis-Dreyfus spent her childhood in several states and countries, including Colombia, Sri Lanka, and Tunisia. She graduated from the all-girls Holton-Arms School in Bethesda, Maryland, in 1979. She later said, “There were things I did in school that, had there been boys in the classroom, I would have been less motivated to do. For instance, I was president of the honor society.”

Louis-Dreyfus attended Northwestern University in Evanston, Illinois, where she was a member of the Delta Gamma sorority. She studied theatre and performed in the Mee-Ow Show, a student-run improv and sketch comedy revue, before dropping out during her junior year to take a job at Saturday Night Live.[19] In 2007, she received an honorary doctor of arts degree from Northwestern University.