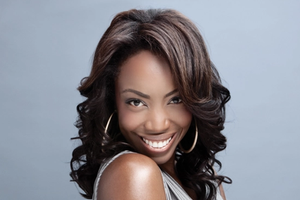 Heather Headley (born October 5, 1974) is a Trinidadian-born American singer, songwriter, record producer, and actress. She won the 2000 Tony Award for Best Actress in a Musical for the titular role of Aida. She also won the 2010 Grammy Award for Best Contemporary R&B Gospel Album for her album Audience of One. In 2018, she recurred as Gwen Garrett on the NBC medical drama television series Chicago Med.

In celebration of Women’s History Month, the National Collegiate Performing Arts (NCPA)TM and UpStaged Entertainment Group, has announced Heather Headley as one of its 31 for 31 days of March most empowering dynamic women – throughout business, politics and entertainment – who got their start in college performing arts.

Headley was born in Trinidad, the daughter of Hannah and Eric Headley (Barbadian). In 1989, she moved to Fort Wayne, Indiana, in the United States at the age of fifteen with her mother and brother Eric Junior when her father was offered a job as pastor of McKee Street Church of God with headquarters in Anderson, Indiana. Headley attended Northrop High School, and was a member of their resident show choir, Charisma, and starred as Fanny Brice in the school’s production of Funny Girl.

After graduating from Northrop High School, Headley attended Northwestern University from 1993 to 1996, to study communications and musical theatre until the last day of her junior year, when she made the decision to become a part of the musical Ragtime and drop out of school.

In 2003, Headley married Brian Musso, an investment advisor who briefly played for the New York Jets. Both attended Northwestern University. On December 1, 2009, they welcomed their first child John David. Headley had her second son Jordan Chase August 18, 2014. In April 2019, the couple welcomed a third child, a daughter.

Headley regularly performs with Vertical Church Band, the worship team from Harvest Bible Chapel. She is featured in their song “How Great Is The Love” and “All Glory”.