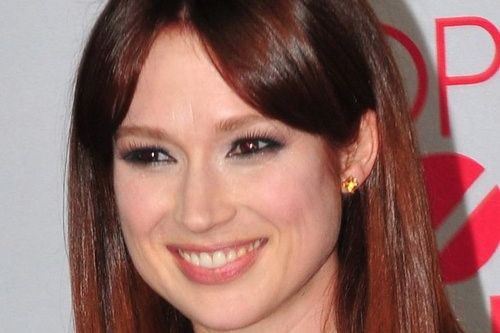 Kemper is best known for playing the roles of Erin Hannon in the sitcom The Office (2009–2013) and Kimmy Schmidt in the sitcom Unbreakable Kimmy Schmidt (2015–2019), the latter of which earned her two consecutive nominations for the Primetime Emmy Award for Outstanding Lead Actress in a Comedy Series. She has also appeared in films, notably Bridesmaids (2011), 21 Jump Street (2012), Sex Tape (2014), and most recently in Home Sweet Home Alone (2021). In 2018, she released her debut book, My Squirrel Days. 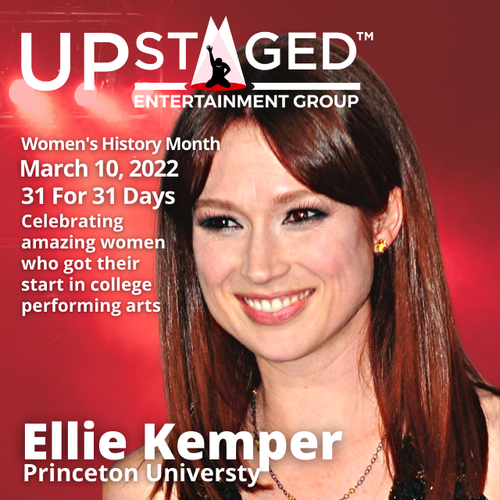 In celebration of Women’s History Month, the National Collegiate Performing Arts (NCPA)TM and UpStaged Entertainment Group, has announced Ellie Kemper as one of its 31 for 31 days of March most empowering dynamic women – throughout business, politics and entertainment – who got their start in college performing arts.

Kemper was born in Kansas City, Missouri, the second of four children of Dorothy Ann “Dotty” (née Jannarone) and David Woods Kemper, a son of one of the wealthiest families in Missouri. Her father is executive chairman of Commerce Bancshares, a bank holding company founded by the Kemper family. She is the granddaughter of Mildred Lane Kemper, namesake of the Mildred Lane Kemper Art Museum at Washington University in St. Louis and the great-great-granddaughter of banker, insurance man, and railroad magnate William Thornton Kemper Sr.

She is the elder sister of television writer Carrie Kemper. Kemper is of Italian (from her maternal grandfather), English, French, and German ancestry. Kemper was raised and remains a practicing Roman Catholic.

Kemper’s family moved to St. Louis when she was five years old. She attended Conway Elementary School in the affluent suburb of Ladue and high school at John Burroughs School, where she developed an interest in theater and improvisational comedy. One of her teachers was actor Jon Hamm, with whom she appeared in a school play.

Kemper graduated from Princeton University in 2002 with an AB in English. At Princeton, Kemper was a member of the school’s improv comedy troupe, Quipfire, which was known for its elaborate pranks. She was also a member of the Ivy Club. As part of her undergraduate degree, Kemper completed an 82-page long senior thesis, titled “Isn’t It Ironic?”, under the supervision of Susan Wolfson, with contribution from Ulrich C. Knoepflmacher.

As a sophomore, she played on Princeton’s 1998 national championship field hockey team, maintaining she sat on the bench “roughly 97 percent” of the time before moving on in the following year to focus on theatre. Kemper attended Worcester College, Oxford for a year, where she studied towards a master’s degree in English literature.

Kemper continued her interest in improvisational comedy while at Princeton. Kemper participated in Quipfire!, Princeton’s oldest improv comedy group, and the Princeton Triangle Club, a touring musical comedy theater troupe. She also appeared in a radio spot for Dunkin’ Donuts.[16]

Kemper earned her Screen Actors Guild card doing commercial advertising of a one-week sale of tents at Kmart. The commercial featured her camping with an onscreen husband, and a shot in which a tarantula crawls across her face. She regularly appeared in comedy sketches on Late Night with Conan O’Brien in the late 2000s, and has made guest appearances on Important Things with Demetri Martin, and E! Television’s The Gastineau Girls,[16][19] which has been described as her “breakout role”. Though the series was reality TV, her role was scripted. She has appeared on Fuse TV‘s The P.A. In October 2008, Kemper appeared on The Colbert Report in a PSA for Teen Voter Abstinence. Kemper has written several sketch comedy shows many of them with her comedy partner Scott Eckert, a fellow Princeton grad. Kemper is a contributing writer for the national satirical newspaper The Onion, and for McSweeney’s. She is also a contributor to The Huffington Post.[26][27]

Upon moving to New York City, Kemper participated in the People’s Improv Theatre[10] and the city troupe of Upright Citizens Brigade, an improvisational comedy and sketch comedy theater. She has appeared in several shows for the Brigade, including Death and/or Despair, Listen Kid, Gang Bang and The Improvised Mystery. At the UCB, she performed with the house improv teams Mailer Daemon and fwand. At the People’s Improv Theatre she performs with the house improv team Big Black Car.  In August 2008, she auditioned for a spot on the NBC sketch comedy show Saturday Night Live, but was not cast.  In July 2009, Kemper was named one of Variety magazine’s “10 Comics To Watch”.