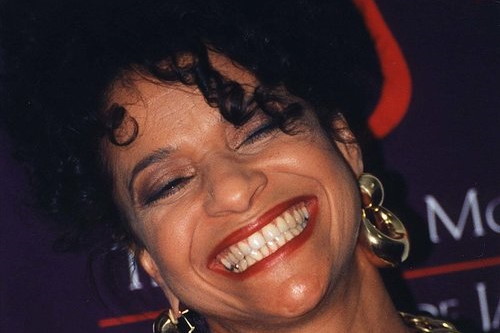 Deborah Kaye Allen (born January 16, 1950) is an American actress, dancer, choreographer, singer-songwriter, directo, producer, and a former member of the President’s Committee on the Arts and Humanities.[ She has been nominated 20 times for an Emmy Award (winning five), two Tony Awards, and has also won a Golden Globe Award[5] and received a star on the Hollywood Walk of Fame in 1991. 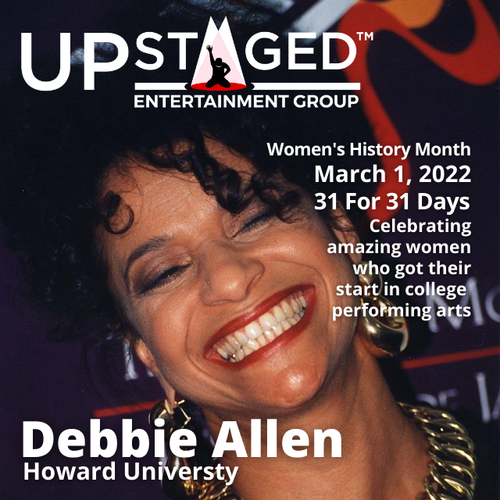 In celebration of Women’s History Month, the National Collegiate Performing Arts (NCPA)TM and UpStaged Entertainment Group, has announced Debbie Allen as one of its 31 for 31 most empowering dynamic women – throughout business, politics and entertainment – who got their start in college performing arts.

Allen is best known for her work in the musical-drama television series Fame (1982-1987), where she portrayed dance teacher Lydia Grant, and served as the series’ principal choreographer. For this role in 1983 she received a Golden Globe Award for Best Actress – Television Series Musical or

Comedy and two Primetime Emmy Award for Outstanding Choreography and was nominated for four Primetime Emmy Award for Outstanding Lead Actress in a Drama Series. Allen later began working as director and producer, most notably producing and directing 83 of 144 episodes of NBC comedy series A Different World (1988-1993). She returned to acting playing the leading role in the NBC sitcom In the House from 1995 to 1996, and in 2011 began playing Dr. Catherine Avery in the ABC medical drama Grey’s Anatomy also serving as an executive producer/director. She has directed more than 50 television and film productions.

Allen was born in Houston, Texas, the third child to orthodontist Andrew Arthur Allen and Pulitzer Prize-nominated artist, poet, playwright, scholar, and publisher, Vivian (née Ayers) Allen. She earned a B.A. degree in classical Greek literature, speech, and theater from Howard University and studied acting at HB Studio in New York City. She was a member of Chi Delta Mu Health Professional Fraternity. She holds honoris causa doctorates from Howard University and the University of North Carolina School of the Arts.

Debbie Allen auditioned at the Houston Ballet Academy at the age of twelve. Even though her audition performance surpassed the standard for admission, Debbie Allen was denied admission to the school. A year later, Allen was given another chance and admitted by a Russian instructor who accidentally saw Allen perform in a show.[citation needed] Once admission recruiters from the academy became aware of the situation, they allowed Allen to stay in the institution because they were pleased with the talent she had showcased. While at the academy, she trained under Suzelle Poole. Allen in 1983

Her experience at the Houston Ballet Academy is not the only time Allen had experienced racism. When she was sixteen, she had a successful audition for the North Carolina School of the Arts, and was given an opportunity to demonstrate dance techniques to other prospective students applying to the institution. Unfortunately, Allen was refused admission, and was told her body was not suited for ballet. In many cases, African American dancers were discouraged from dance because they were told their body structure did not fit the preferred stereotype ballet dancer’s body. This prejudice effectively barred many talented and skilled dancers from ballet. After receiving numerous rejections, Allen decided to mainly focus on her academics and, from then on, was well on her way to the start of her career.

* Allen was appointed by President George W. Bush in 2001 as a member of the President’s Committee on the Arts and Humanities.[25]

* For her contributions to the television industry, Debbie Allen was honored in 1991 with a star on the Hollywood Walk of Fame at 6904 Hollywood Boulevard in the center of Hollywood directly opposite the Dolby Theatre at Hollywood & Highland Center.[26]

* Allen was presented with the George and Ira Gershwin Award for Lifetime Musical Achievement, at the 1992 UCLA Spring Sing.[27]

* Three-time Emmy Award winner for Choreography for the series Fame and The Motown 25th Anniversary Special.

* 10 Image Awards as a director, actress, choreographer, and producer for Fame, A Different World, Motown 25, The Academy Awards, The Debbie Allen Special and Amistad.

* On February 4, 2009, Debbie Allen was honored for her contributions to dance and was presented with a Lifetime Achievement Award by Nia Peeples at The Carnival: Choreographer’s Ball 10th anniversary show.[28]

* Allen was awarded an honorary doctorate from the North Carolina School of the Arts, as well as from her alma mater, Howard University.[29]

• Debbie Allen at The Interviews: An Oral History of Television