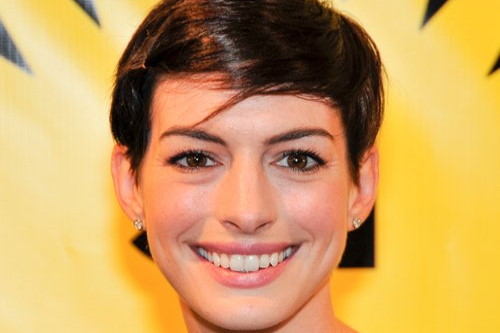 Anne Jacqueline Hathaway (born November 12, 1982) is an American actress. The recipient of various accolades, including an Academy Award, a Golden Globe Award, and a Primetime Emmy Award, she was among the world’s highest-paid actresses in 2015. Her films have grossed over $6.8 billion worldwide, and she appeared on the Forbes Celebrity 100 list in 2009. 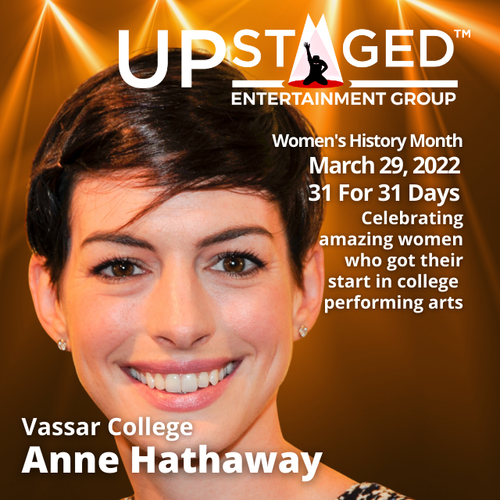 In celebration of Women’s History Month, the National Collegiate Performing Arts (NCPA)TM and UpStaged Entertainment Group, has announced Anne Hathaway as one of its 31 for 31 days of March most empowering dynamic women – throughout business, politics and entertainment – who got their start in college performing arts.

Hathaway graduated from Millburn High School in New Jersey, where she performed in several plays. As a teenager, she was cast in the television series Get Real (1999–2000) and made her breakthrough as the protagonist in her debut film, the Disney comedy The Princess Diaries (2001). After starring in a string of unsuccessful family films, Hathaway made a transition to adult roles with the 2005 dramas Havoc and Brokeback Mountain.

Hathaway graduated from Millburn High School in New Jersey, where she performed in several plays. As a teenager, she was cast in the television series Get Real (1999–2000) and made her breakthrough as the protagonist in her debut film, the Disney comedy The Princess Diaries (2001). After starring in a string of unsuccessful family films, Hathaway made a transition to adult roles with the 2005 dramas Havoc and Brokeback Mountain. The comedy-drama The Devil Wears Prada (2006), in which she played an assistant to a fashion magazine editor, was her biggest commercial success to that point. She played a recovering addict with a mental illness in the drama Rachel Getting Married (2008), which earned her a nomination for the Academy Award for Best Actress.

Hathaway went on to star in the commercially successful romances Bride Wars (2009), Valentine’s Day (2010) and Love & Other Drugs (2010), and the fantasy film Alice in Wonderland (2010). In 2012, she starred as Selina Kyle / Catwoman in her highest-grossing film The Dark Knight Rises, the final installment in The Dark Knight trilogy. Also that year, she played Fantine, a prostitute dying of tuberculosis, in the musical romantic drama Les Misérables, for which she won the Academy Award for Best Supporting Actress. She then played a scientist in the science fiction film Interstellar (2014), the owner of an online fashion site in the comedy The Intern (2015), a haughty actress in the heist film Ocean’s 8 (2018) and a con artist in the comedy The Hustle (2019).

In addition to film roles, Hathaway has won a Primetime Emmy Award for her voice role in the sitcom The Simpsons, sung for soundtracks, appeared on stage, and hosted events. She supports several charitable causes. She is a board member of the Lollipop Theatre Network, an organization that brings films to children in hospitals, and advocates for gender equality as a UN Women goodwill ambassador. Married to actor and businessman Adam Shulman, she has two sons with him.

Hathaway has served as a long-term advocate for the Nike Foundation to raise awareness against child marriage. In July 2006, she spent a week in Nicaragua to help vaccinate children against hepatitis A. She has also traveled to other countries to heed the rights of women and girls, including Kenya and Ethiopia. In 2008, she was honored at Elle‘s Women in Hollywood tribute and won an award from the Human Rights Campaign for her philanthropy;she was also honored for her work with Step Up Women’s Network in 2008. She then teamed up in 2010 with World Bank in a two-year development program The Girl Effect whose mission focuses on helping empower girls in developing and developed nations where one-third of young women are not employed and not in school. In 2013, she provided the narration for Girl Rising, a CNN documentary film, which focused on the power of female education as it followed seven girls around the world who sought to overcome obstacles and follow their dreams.

Hathaway serves on the board of the Lollipop Theatre Network and is involved with charities Creative Coalition, St. Jude Children’s Research Hospital and the Human Rights Campaign. She is a supporter of LGBT rights and has donated money to organizations that support same-sex marriage. In 2016, Hathaway was appointed UN Women Goodwill ambassador based on her advocacy for gender equality. The following year, she spoke on International Women’s Day in favor of paid parental leave for both men and women. To promote an increased awareness of systemic sexism in the entertainment industry, Hathaway has advocated for greater professional opportunities for women and criticized Hollywood as not being a place of equality. In 2018, she collaborated with 300 women in Hollywood to set up the Time’s Up initiative to protect women from harassment and discrimination. Hathaway has also spoken out against the issues of bullying of gay students, discrimination toward transgender children, and white supremacy.[219]