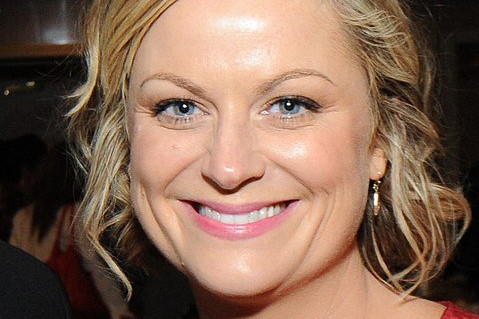 Amy Poehler (born September 16, 1971) is an American actress, comedian, writer, producer, and director. After studying improv at Chicago‘s Second City and ImprovOlympic in the early 1990s, she co-founded the improvisational-comedy troupe Upright Citizens Brigade. The group moved to New York City in 1996 where their act became a half-hour sketch-comedy series on Comedy Central in 1998. Along with other members of the comedy group, Poehler is a founder of the Upright Citizens Brigade Theatre.

In 2001 she joined the cast of the NBC sketch-comedy series Saturday Night Live. She became co-anchor of SNL‘s Weekend Update in 2004 until she left the series in 2008 to star as Leslie Knope in the NBC sitcom Parks and Recreation. She has also performed voice acting roles for the films Shrek the Third, Horton Hears a Who!, Free Birds, Inside Out and the series The Mighty B!, which she also created. Poehler is an executive producer on the television series Welcome to Sweden, Broad City, Difficult People, Duncanville, Three Busy Debras, and Russian Doll. She was the voice of Eleanor in the live-action/CGI Alvin and the Chipmunks film franchise until 2015, when she was replaced by Kaley Cuoco. 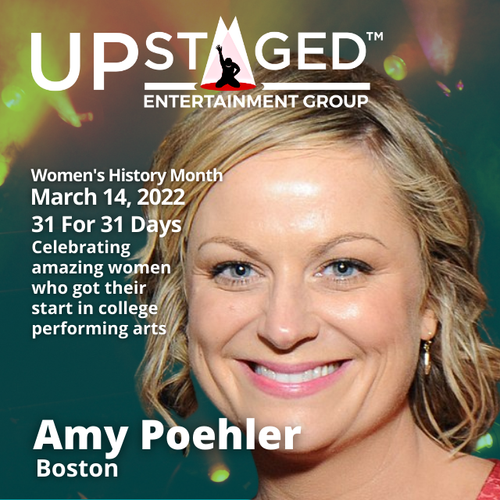 In celebration of Women’s History Month, the National Collegiate Performing Arts (NCPA)TM and UpStaged Entertainment Group, has announced Amy Poehler as one of its 31 for 31 days of March most empowering dynamic women – throughout business, politics and entertainment – who got their start in college performing arts.

Poehler was born in Newton, Massachusetts to school teachers Eileen and William Poehler. Poehler gets her feminism streak from her mom, Eileen, considering Eileen too was active in feminism in the 1970s. Poehler credits her father with encouraging her to break social protocols and take risks. She has one younger brother, Greg, who is also a producer and actor. Poehler’s ancestry is Irish, along with German, Portuguese, and English; her Irish roots originate from County Sligo and County Cork. Her great-grandmother immigrated from Nova Scotia, Canada to Boston in the late 1800s. She was raised as a Catholic.

Poehler grew up in nearby Burlington, Massachusetts, which Poehler describes as a blue-collar town. Her favorite performers included sketch comedians Carol Burnett, Gilda Radner, and Catherine O’Hara. When she was 10 years old, Poehler played Dorothy in her school’s production of The Wizard of Oz.[10] The experience inspired Poehler’s love of performing. Poehler continued acting in school plays at Burlington High School. She also participated in other activities during her time in high school including student council, soccer, and softball. After graduating from high school in 1989, she enrolled at Boston College. During college, Poehler became a member of the improv comedy troupe My Mother’s Fleabag. She graduated from Boston College with a bachelor’s degree in media and communications in 1993.